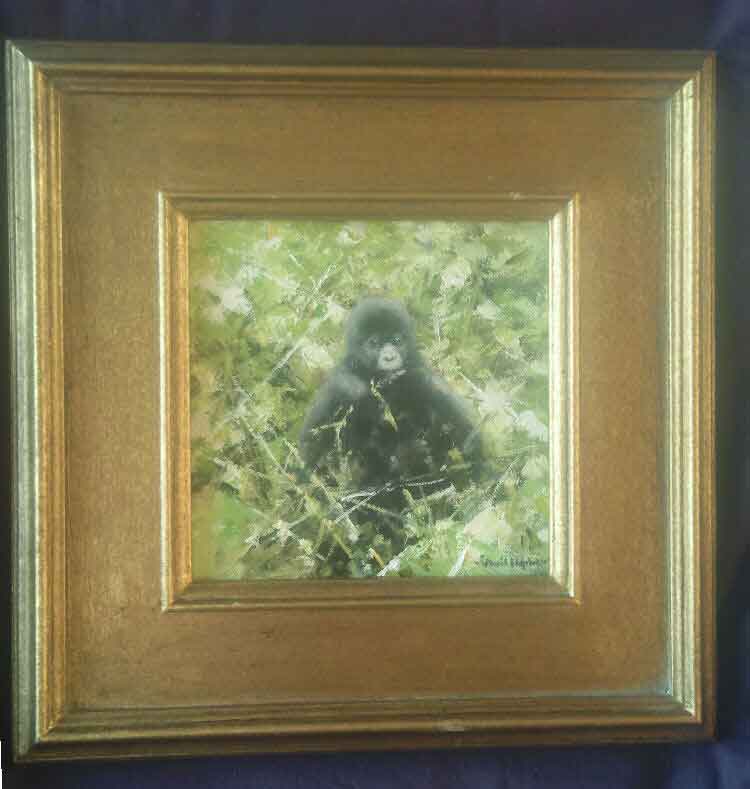 Biography of wildlife artist, David Shepherd, CBE, FRSA, FRGS, OBE.
Internationally recognized as one of the world's finest wildlife artists. David Shepherd has at all times felt that he had a duty in the form of conservation towards the world and the animals that inhabit our planet.
In his lifetime, David Shepherd has painted and drawn many pictures, and is able to share his many tales and experiences with people internationally, often talking at charity dinners and prestigeous social events. His persona lends itself naturally to this cause, as he is a most approachable down-to-earth fellow who enjoys sharing his pleasure of art and his concern over the diminishing wildlife throughout the world. In his early days, he was 'thrown' into the creative world purely by chance, as he wasn't particularly keen about other college activities.

David Shepherd is commonly quoted as saying that upto his late teens his life was not very successful, as he always had an ambition to be a game warden in Africa. So after ending his schooling, David Shepherd left England with the concept of a career within the national parks of Africa. Unfortunately, he was promptly instructed that there was no place for him, and his childhood desires lay in ruins. Throughout school days, his foremost curiosity in art had been as a substitute for the compulsary games of rugby which left him with a fear of dread.

David Shepherd's first autobiographical book 'The Man Who Loves Giants' was published in 1976 which very quickly became a best seller.
This was revised and updated in 1989 as subsequent editions were published.
A second book illustrating his love for steam trains was published in 1984 'A Brush With Steam'
and in 1985 'The Man and his Paintings' was the first comprehensive book showing a complete spectrum of David's work.
'An Artist in Conservation' was released in 1992 which illustrated some of Mr Shepherd's finest paintings.
'My Painting Life' and 'Only One World' were published in 1995.
'Painting with David Shepherd, Unique Studio Secrets Revealed' was published in 2004


'The Man Who Loved Giants'
was the title for this film of David Shepherd's life story produced in 1972 by the late James Stewart.
The documentary was shown worldwide.
'The Last Train to Mulobezi' tells an exciting story of the survival of an ancient locomotive and railway coach from the Zambezi Sawmills Railway and their 12,000 mile journey back to England.
The train was given as a gift by Dr Kenneth Kaunda, the President of Zambia, and after raising enough money through the sale of paintings in USA.
A helicopter was bought and given to Zambia to help prevent poaching.
Thames TV produced a series of six half hour programmes titled 'In Search of Wildlife'
Illustrating the plight of endangered mammals throughout the world.
These were later broadcast in the USA.
'Nature Watch' with Julian Pettifer began in 1990 and David Shepherd produced the first programme in the series.
Last but not least, David Shepherd has been the subject of the programme 'This is Your Life'.


30 years experience and a collection of hundreds of David Shepherd signed, limited edition prints in the UK!