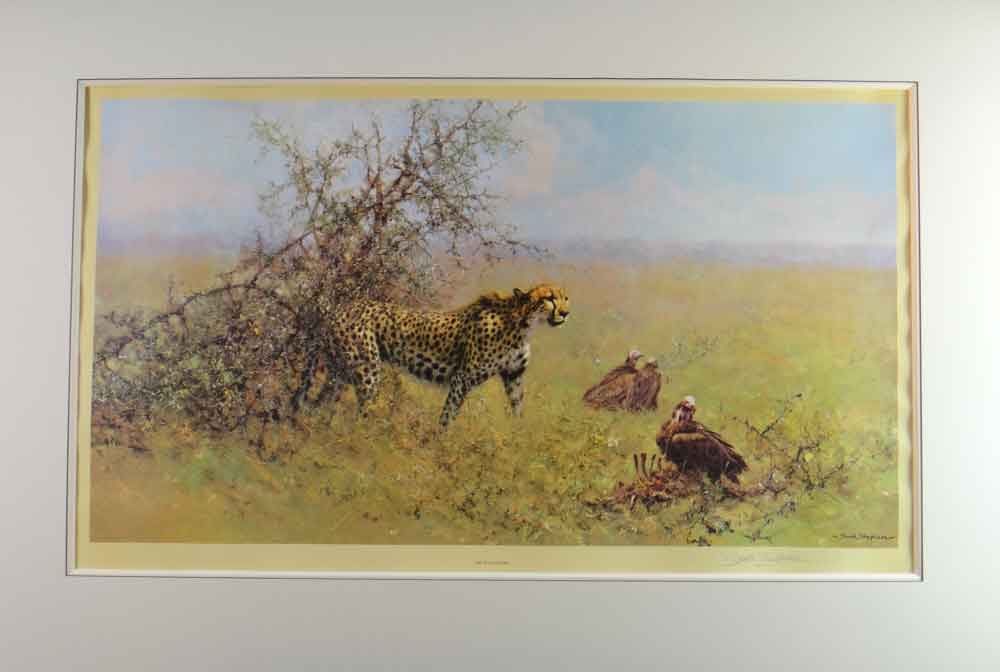 Biography of wildlife artist, David Shepherd, CBE, FRSA, FRGS, OBE.
Known as possibly the world's finest wildlife artist. David Shepherd has worked for many years as an artist across the world, His role as a conservationist is passionately upheld, and he has always felt that he had a obligation to help conserve the world and the animals that we live amongst.
During his lifetime, David Shepherd has painted and drawn hundreds, if not thousands of images, and loves to talk to people of the many experiences he has had whilst travelling and painting throughout the world, often speaking at charity dinners and other prestigeous social events. His personality is beautifully suited to this cause, as his easy going and straight forward approach comes across well to express the love of art and his feelings for the ever decreasing wildlife in the world. As a young man, luck often deals its hand, and this was no exception, he wasn't particularly keen about other college activities.

David Shepherd is often heard explaining that during his ealier years his life was anything but successful, his main ambition was to be an African game warden. When his studying was done, David Shepherd left England with the hope of a life within the national parks of Africa. Sadly, these hopes were to fall at the first hurdle, and he was informed by the head game warden that there were no vacancies, his dreams were ruined. Throughout school days, his foremost curiosity in art had been as a substitute for the compulsary games of rugby which left him with a fear of dread. It was at this time David Shepherd's father helped him, by encouraging him to seek some formal training for his artistic leanings.

David Shepherd was interviewed at Slade school of fine art in London with his bird picture, and was promptly told that he had little artistic ability and that any lessons would be of little use. The bus driver idea was staring to look like the other option, then by shere chance, he met the highly skilled marine artist, Robin Goodwin. Unfortunately, Robin did not take on apprentices, but somehow David Shepherd managed to become an exception to the rule, and he agreed to see some of David's work.

Within twenty four hours, he arrived at Robin Goodwin's home in Chelsea with his 'bird' painting, and to his absolute delight Robin Goodwin agreed to teach him. It is due to the teachings of this artist that David was able to show his true talent, and has at all times a feeling of deep gratitude for the help he was given by from Robin Goodwin. One of David's original paintings 'St. Michael's Mount, Cornwall was painted during his apprenticeship with Robin Goodwin.


The Artist and Conservationist today.
Tirelessly travelling, Mr Shepherd travels one part of the world to another. Admired and respected by many,
He is regarded as being the world's leading wildlife painter. His signed, limited edition prints can be seen in many homes
throughout the world and he is always busy and enjoying his life to the best of his abilty.
Having celebrated his 70th birthday on 25th April 2001 with a fundraising dinner at the Natural History Museum,
which raised over £100,000 for's wildlife projects.
He has last year celebrated his 80th birthday with another successful dinner to raise funds for conservation at the Natural History Museum,
attended by a host of celebrities and many admirers of his work.

If you would like to visit the studio in Nottinghamshire, (Saturdays and Sundays are fine too) Please call 01623 799 309 We have a collection of over 500 David Shepherd signed limited edition prints and original paintings for sale.

Studio open 7 days a week!
Viewing by appointment
Back to David Shepherd prints for sale