Testimonials
"I have known David Tatham for about two years, and have bought several oil paintings, lithographs and prints from him.
The service he provides has always been excellent - reliable, efficient and very accommodating.
The art world can be an extremely daunting place, and I find it reassuring knowing I can trust and rely on someone as knowledgeable and experienced as David for help and advice.
I thoroughly recommend his services, and also a visit to the delightful Cornwater Fine Art Gallery."
A.D-S., London


"A very nice & professional business you have, & your sales manner was great." D.Y. Cheshire

"A thoroughly proffessional service, David's knowledge of Lowry, Shepherd, and other artists is second to none, I will definately use his service again".....M H Lincs. 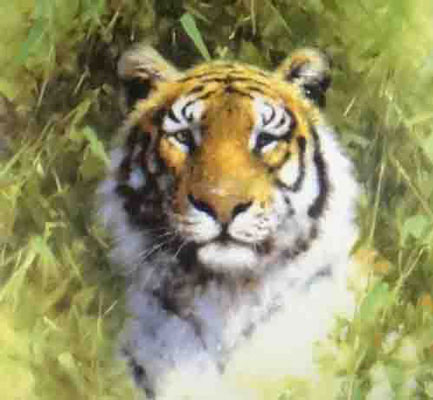 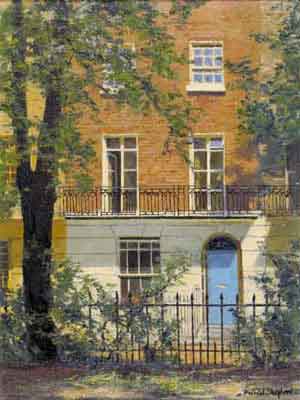 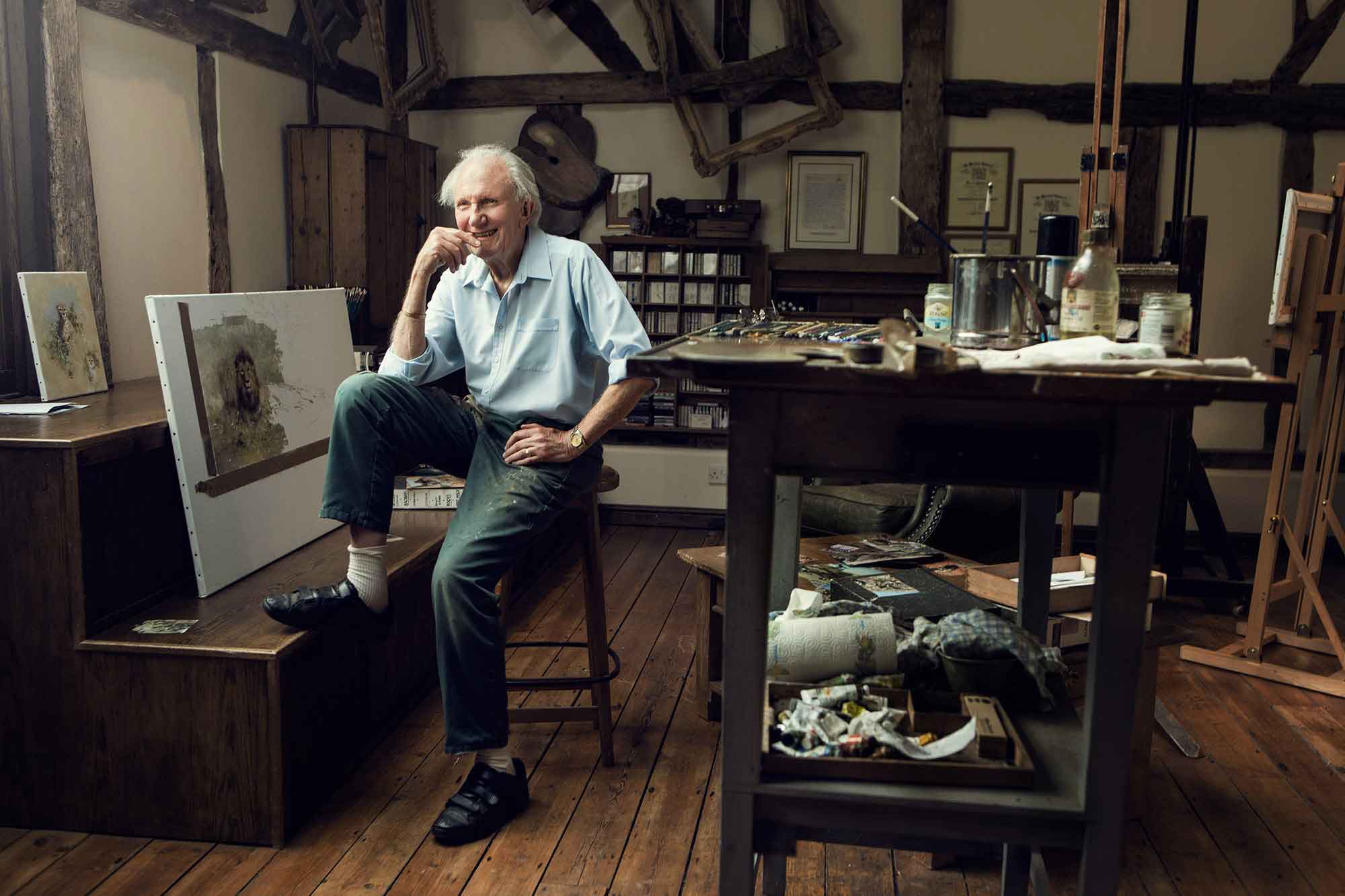 David Shepherd in his studio 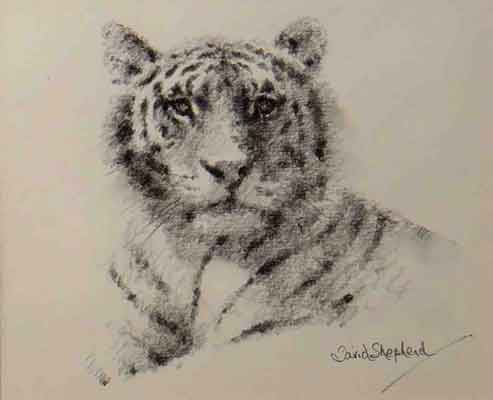 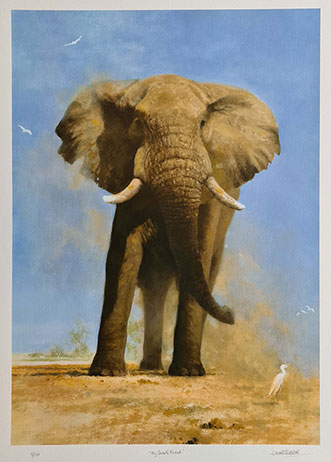 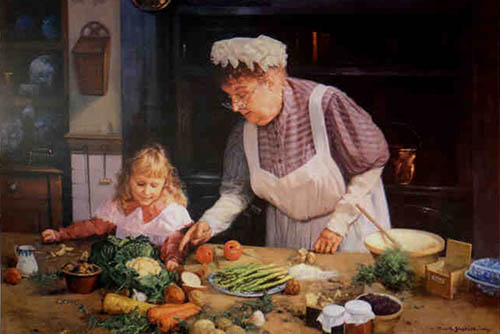 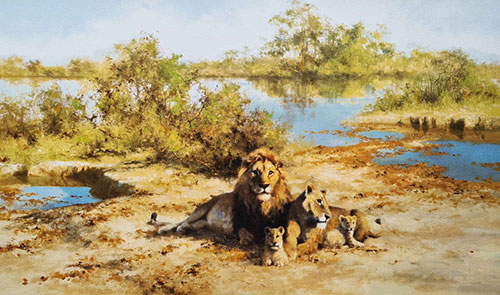 In the cool of evening, silkscreen 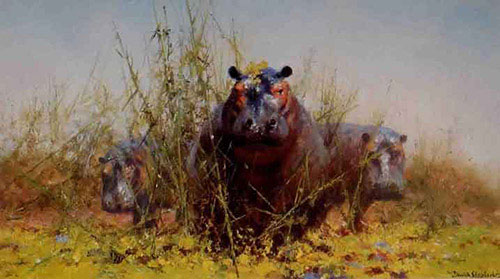 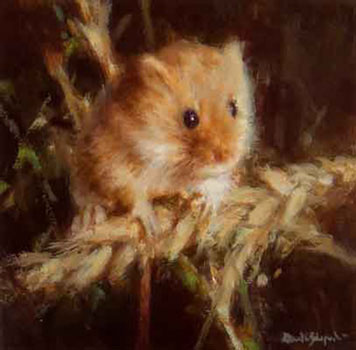 Biography of wildlife artist, David Shepherd, CBE, FRSA, FRGS, OBE.
Internationally recognized as the world's finest wildlife artist. David Shepherd has at all times felt that he had a duty in the form of conservation towards the world and the animals that inhabit our planet.
In his lifetime, David Shepherd has painted and drawn many pictures, and was able to share his tales and experiences with people internationally, often talking at charity dinners and prestigeous social events.
His persona lent itself naturally to this cause, as he was a most approachable down-to-earth fellow who enjoyed sharing his pleasure of art and his concern over the diminishing wildlife throughout the world.
In his early days, he was 'thrown' into the creative world purely by chance, as he wasn't particularly keen about other college activities.

David Shepherd is commonly quoted as saying that upto his late teens his life was not very successful, as he always had an ambition to be a game warden in Africa.
So after ending his schooling, David Shepherd left England with the concept of a career within the national parks of Africa.
Unfortunately, he was promptly instructed that there was no place for him, and his childhood desires lay in ruins.
Throughout school days, his foremost curiosity in art had been as a substitute for the compulsary games of rugby which left him with quite frightened.

Unable to understand what would possibly possess people to roll around a muddy rugby pitch and endure horrible injury, David Shepherd took refuge in the faculty artwork department
where he produced a hideous picture of some birds, which he brings along with him to this present day when public speaking.

After his dissappointment at not been given the chance to be part of Kenya's game warden neighborhood, he managed to find a job in a neighborhood resort on the coast working within the reception for one pound per week.
David Shepherd started to paint pictures of birds, and by chance managed to sell seven pictures at ten pounds a canvas, which allowed him to pay for his ticket back to England on the Union Castle steamship.

When back in England he saw two possibilities of career for himself. Either David Shepherd could try to make it as an artist, or drive a bus.
After careful thought he decided the bus driver choice was by far the safest bet, as it was well-known that almost all artists had little cash or prospects.
His father helped at this level and urged that if he actually needed to develop his artistic skills, he would want some training.

David Shepherd set off to the Slade school of fine art in London with his bird picture, unfortuinately he was told that he had no artistic ability and that instructing him would be pointless.
Driving a London bus was beginning to appear the extra likely possibility, until by complete coincidence, he met an artist called Robin Goodwin who was regarded as a highly skilled marine artist.
He never worked with apprentices, but luckily for David Shepherd, he agreed to see some of his work.
The very subsequent day David Shepherd arrived at Robin Goodwin's studio in Chelsea with his 'bird' painting, and to David's sheer amazement Robin Goodwin agreed to help him.
It is because of this artist that David achieved the creative staus that he enjoys in the present day, and has at all times a feeling of deep gratitude for the help he acquired from Robin Goodwin.

David Shepherd's first autobiographical book 'The Man Who Loves Giants' was published in 1976 which very quickly became a best seller.
This was revised and updated in 1989 as subsequent editions were published.
A second book illustrating his love for steam trains was published in 1984 'A Brush With Steam'
and in 1985 'The Man and his Paintings' was the first comprehensive book showing a complete spectrum of David's work.
'An Artist in Conservation' was released in 1992 which illustrated some of Mr Shepherd's finest paintings.
'My Painting Life' and 'Only One World' were published in 1995
'Panting with David Shepherd, Unique Studio Secrets Revealed' was published in 2004


The Artist and Conservationist.
Constantly moving, his work took him tirelessly from one continent to another.
Admired and respected by many, David Shepherd was regarded as being one of the world's leading wildlife artists.
His signed, limited edition prints can be seen in many homes
throughout the world and he was always on the busy and enjoying his life to the fullest.
"I want to live to be 150. It will take that long to do everything I want to do.
I run almost everywhere I go because I am so anxious to get on with the joy of what I am doing next."
After celebrating his 70th birthday on 25th April 2001 with a fundraising dinner at the Natural History Museum,
which raised over £100,000 for's wildlife projects.
He celebrated his 80th birthday with another successful fundraising dinner at the Natural History Museum,
attended by a host of celebrities and many admirers of his work.

We will endeavour to better any quote and give you the finest possible service.
Visit the Wildlife art studio in Nottinghamshire, (Saturdays and Sundays are fine too)
We have a collection of over 500 David Shepherd signed limited edition prints and original paintings for sale.
A viewing can also be arranged at your home. We also specialize in signed prints by the world acclaimed artist L.S.Lowry.
The demand for his work has now reached record highs, and due to the relatively few signed limited edition prints available,
they are proving to be an excellent investment, far greater than many current banking investments.
A watercolourist, whose work needs little introduction in the world of art is Sir William Russell Flint.
We stock hundreds of this artist's signed limited edition prints and always a fine selection of his original watercolour paintings.
Throughout his life Sir William Russell Flint has spent many years painting beautiful watercolour images of scenes in France,
in particular Dordogne and the Perigord, where this beautiful holiday house is to let click here
and offers complete tranquility and relaxation.
There are also a number of signed limited edition prints of paintings from Britanny, The Loire, Ardeche, Provence.
We have for sale several original paintings from the south west France, near to the beautiful towns of Brantome and Perigueux and also Languedoc
Russell Flint's work has now become regarded as some of the finest watercolour paintings in the world. 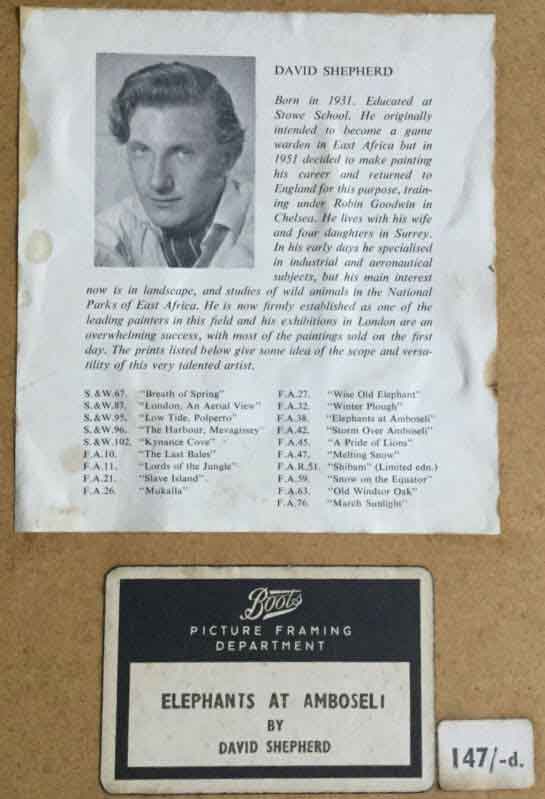